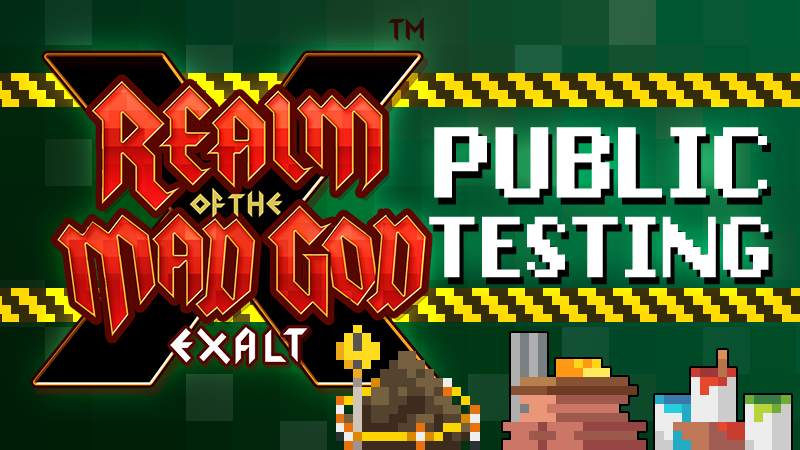 While the Month of the Mad God is fast approaching, the team is getting closer to finishing up everything for it! We are just as excited as you are about the new features and changes.

Therefore it is time for another round of testing. In order to make sure we get more feedback and input on our update, we have prepared a small pack for you.

We are opening 3 Interregnum Portals every 4 Minutes in the Realm!

If 2000 players join us on testing over the weekend and help us out with getting feedback in, every player will receive a fame pack in the shop for 350 Fame. It can be redeemed 3 times per account. And will be in the shop from the 26th at 8 AM UTC until the 29th at 8 AM UTC.

The pack will contain: 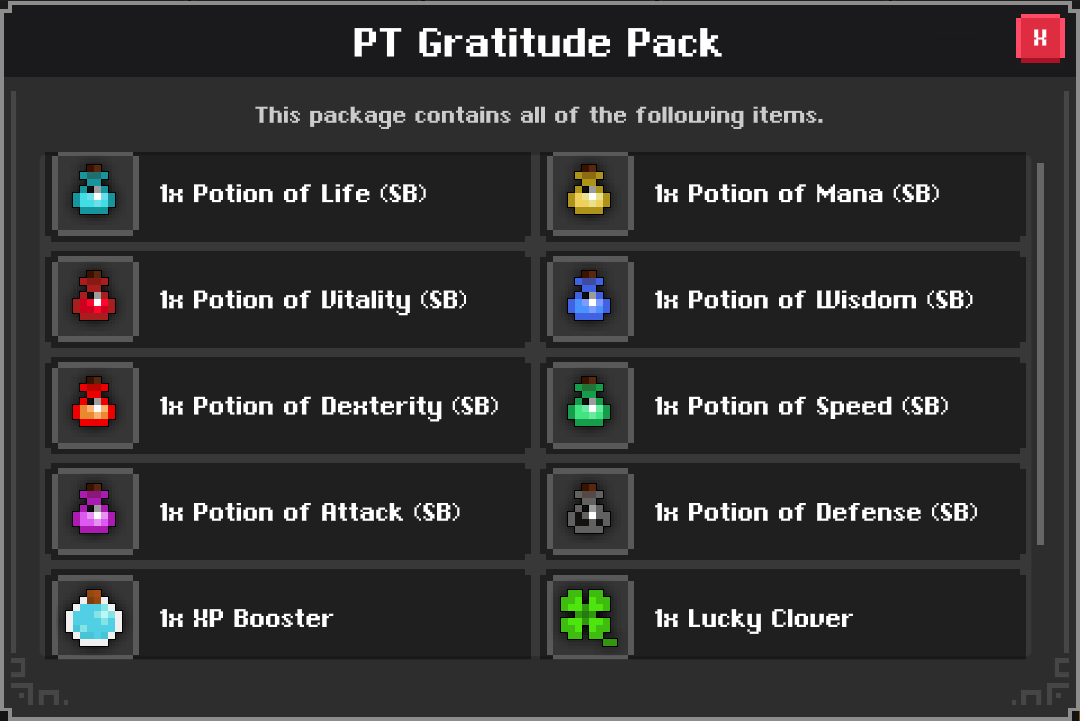 Let’s have a look at all the changes we already did, based on your feedback.

We have been listening to your feedback regarding the new changes as well as making some of our own observations, this patch we will be rolling out the following changes and continue to listen to your feedback and observe the balance of the new scaling system.

In general, we received some feedback that these changes were punishing realm groups too much, as such the lowest end of the hp scaling formula has been lowered a little to hopefully help with the size of groups you might find in a realm. In addition, we observed the highest end of players being a little too powerful and have raised that end a bit to try to balance it out.

Minions have been simplified to use one formula across all normal dungeon difficulties as many of the lower difficulty dungeon minions don’t scale at all so dedicating formulas for their tiers was wasted.

The Shatters previously had a higher boss scaling formula than the rest of the game, as a result, our last update to it tried to keep in line with that already higher scaling and it ended up going too high. We have updated the Shatters boss scaling to the following:

Larger shatters minions, including the royal guard, will use the standard minion scaling for normal dungeons, however many of the smaller minions in the dungeon will use the following smaller scale to encourage splitting up while clearing:

Month of the Mad God Features

Let’s have another look at the things coming up with MotMG! I know you already know about them and checked them out and absolutely read every single word in our blog posts, but still. A reminder doesn’t hurt.

Once again. We will not fully go into detail about everything here. This will be done with the release notes once the update goes live! We also have several blog posts for the features, so go check them out!

Battlepass will also start a new season system in Realm of the Mad God, where every ~2 months a new season will start with a completely new reward ladder and more options and game modes to come!

The battlepass is a reward ladder in which you can claim prizes when you collect enough Battlepass XP (BXP for short). This new type of resource is granted by enemies (most enemies that can give XP, can also give BXP, though not in the same proportion). When you are collecting BXP in the realm or dungeons, you can press ‘K’ (the key for showing the logs) and see how close you are to the next milestone in the Battlepass ladder.

Bear in mind that dates, prizes, and UI visuals are placeholders and it is all Work in Progress. Some visual indications might be missing yet.

In the Battlepass menu, you will also find awesome artwork from Saturnz! @saturnzcheery on Twitter.

We are also expanding the different bonuses players will be able to gain. While in the game we already have some bonus boosters like the Loot Tier Potion (which will still be in the game), we want to introduce new types, some of them more commonly accessed and some of them which can become powerful and interesting rewards in events and other systems in the game. We call these boosters “accelerators”.

Accelerators can last for a certain time, while you have an item equipped, or even be permanent for the whole season!

Another important characteristic is that Accelerators aren’t applied to any character in particular but to the whole account, so you can swap your characters and the accelerators would still be active.

And here is the first batch of accelerators that will become available during MotMG (bear in mind they are still WIP): They will be automatically consumed upon claiming them in the Battlepass but for this Test, you will be able to find them in the shop.

Player titles are equipped through the Wardrobe (in your Vault) and can be unlocked by completing special requests. direct purchase, or other methods. Some Player Titles are exclusive for players who complete special achievements!

This Month of the Mad God will feature a well-deserved rework of Assassin and Sorcerer classes. You will be able to find items in the Shop to try their new abilities.

You can read more about this rework here: Assassin and Sorcerer rework sneak peek

Amid it, all stands a figure clad in obsidian commanding his minions to destroy everything I have ever known.

It was then that I awoke to my power. Many would call it a gift, but to me, it’s a reminder.

Vindication is the event that will happen through the Month of the Mad God 2022. This event will put you against the enigmatic Syndicate, an organization of outlaws somehow tied to the mysterious Wanderer. Syndicate enemies are appearing in different places of the realm, trying to execute some kind of shady plan that might pose a huge risk to the entire world. While the Syndicate are alleged enemies of Oryx himself, they aren’t friends of the Heroes of the Nexus either… What are their plans? Can they be stopped?

In this Public Testing, you will be able to test new encounters and learn about upcoming fights with these mysterious enemies. Depending on where you find them, their properties and fight can slightly change (so will their loot!).
Keep in mind, that Art in the Interregnum is still a work in progress but shouldn’t affect any gameplay.

Encounters in the realm

Encounters in the dungeon

Encounters in the mysterious dimension

Quest Room and the Shady Vagrant