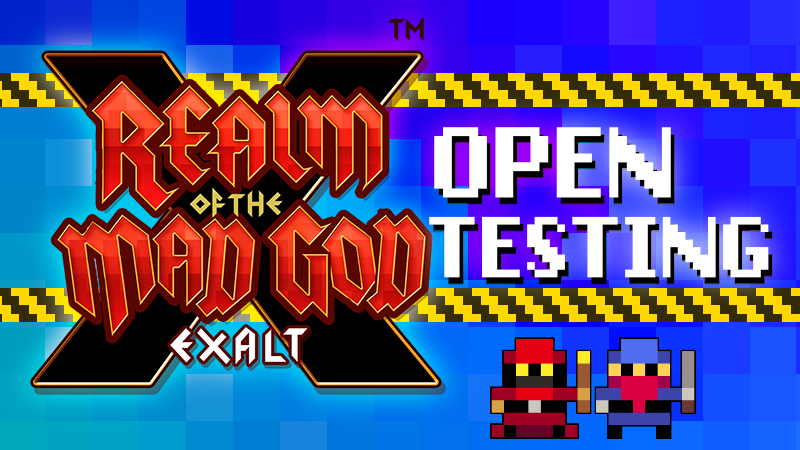 Another Testing Session is right around the corner. This weekend our main focus is on the two-class reworks we have teased some weeks ago. The Sorcerer and Assassin rework! If you missed the teaser go and have a look at our blog!

Additionally, we have also activated our new weapon subtypes! You heard right, you will be able to try out all 6 new types! We also recently released information about those on our blog. You can read about them here: Part 1 and Part 2

You will also be able to have your first glance at another new feature. Player Titles!

The Nexus will have portals open to The Shatters, Deadwater Docks, and Oryx Sanctuary so that you can have a blast testing the new features.

Let’s have a look at the reworks.

Assassin is a well-beloved class by many players.

Its previous role in battle was almost always overshadowed by other classes who had more versatile, more powerful (or both) options. This had a lot to do with how his ability, Poison, worked. In order to return Assassin to the spotlight, we have reworked entirely how Poison works now. We believe it will now emphasize more the distinctively individualistic approach to battle of Assassin characters, while still being able to contribute to the group if they carefully use their skills with good judgment.

Poisons can do damage and other effects in several ways, which will vary depending on which specific Poison you equip. Now, Poisons will give the user (the player who used that Poison) an individual damage boost. This means the enemy will take extra damage if you applied your Poison first.

Other players’ Poisons don’t affect for this extra damage, and if different Poisons are applied at the same time, only the highest damage boost will be applied.

In addition to this, we have implemented the idea of “wisMod” that some items have to Poisons, but in a more generic way. Now Poisons can have a boost based on another of your stats (not necessarily Wisdom). And this boost is not only for damage! The area size, the instantaneous damage or the sustained damage can all be affected by one or several stats. This flexibility in implementation allows us to create a wide variety of Poisons with which we believe will benefit Assassin!

To recap: Assassins now inflict extra damage to enemies if they previously Poison them.

The rework of Sorcerer has also been focused on expanding his ability equipment, scepter, with additional options that put the class in its potential. We think Sorcerer should be a class that benefits the most from a player who is able to consider careful timing and good aim to get the most of an ability that can be devastating if used correctly.

But now, additionally, enemies can become “affected” if they are hit by a lightning, becoming themselves a source of area damage. If an enemy is struck by the lightning, for a brief period of time they would transform into a “damaging AoE” which can expand to other enemies, potentially affecting even more enemies that weren’t hit by a lightning. This damaging area could potentially do inflict a status effect besides (or instead) of damage.

To recap: if the enemy is struck by lightning, for a brief time it will start emitting a damaging radius that can affect itself and other enemies around it.

UT: The “Fractal Blades” have the base shots pierce and at the halfway point and end of the blades range they split into two additional non-piercing projectiles adding more damage for spacing at either of those points.

Tiered: Crossing blades shoot two shots offset to the sides and in front of the player, these shots are angled inwards to cross each other at a specified range in front of the player. Crossing blades provide highly increased damage with the downside of requiring much better positioning which can’t be circumvented by getting close enough to an enemy.

UT: The “Memory of the Fallen” crossing blades have a shot pattern that switches every few seconds, this changes the hit zone from a smaller one to a longer one.

Tiered: Flails fire a chain of 3 projectiles each with a different range, all of which will boomerang back to the player at the same time, creating a chain like effect similar to the Soul Cursed Scythe dagger. Flails aim to provide a piercing tool for melee players that are usually lacking them, this is balanced by the slow fire rate of the weapon as well as the difficulty in hitting all the projectiles.

UT: The “Barnacle Basher” fires a longer chain headed by an anchor, this flail is even slower than usual but does massive damage when hitting the endpoint.

Tiered: Longbows burst-fires 4 sets of 3 shots that meet at the end of their range. Unlike normal bows, these bows maintain full effectiveness and large amounts of damage at the max range at the cost of requiring increased accuracy

UT: The “Longbow of the Guardian” is a hybrid of both regular bows and subtype bows, firing 4 shots in a burst with the outer arrows dealing armor-piercing damage.

Tiered: Spellblades fire two shots that are stacked directly on top of each other. One of these shots deals higher damage while the other shot deals lower damage but pierces armor as well as multihits giving staff classes better access to piercing at a cost of raw damage.

UT: The “Crystalized Worm Spellblade” fires two worm heads from the left and right of the player. Accuracy and proper spacing allow for a skilled player to do significant damage.

Tiered: Unlike regular wands, Morning Stars are shorter range and do not pierce enemies. In return, they are a 5-shot shotgun allowing for big damage on a single target if you’re able to land all your shots.

UT: The “Beekeeper’s Flamethrower” only fires 3 shots as opposed to the tiereds 5, these projectile armor pierce and move slowly to allow for greater coverage.

Player Titles are a new customization option for your characters. It will allow you to have extra, predetermined words attached to your username. Show your title to the world! Titles are shown in most places where your username is displayed: chat, death notification, character panel, and of course above your character. You can equip them through the Wardrobe, and they can be unlocked in several ways!