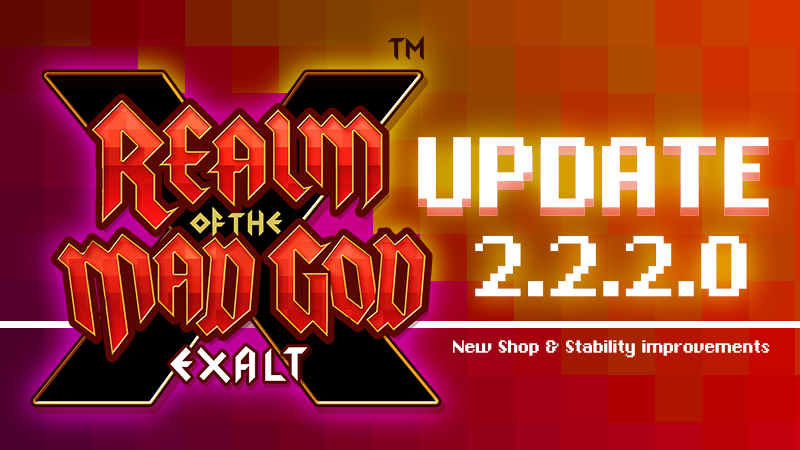 This update brings you the (almost complete) new shop experience. While we will still add new features to it, this is pretty much the new UI we wanted to present you with. Please let us know in the comments what are your thoughts on it.
You may be pleased to know that the bugs that affected the Kensei should be fixed. You can swoosh and slash at ease again. Also the new STs for the Bard, Summoner, and Kensei have started dropping. Check out the locations down below.

Here are the changes you can expect with this update:

This Valentine’s Day, we dream of the untold story of the King and Queen of the Shattered Kingdom. Their unfortunate fates are known today, but is anything recorded of their courtly life at the height of the Kingdom before Oryx the gladiator made his grab for power? The historians who unearthed the scrolls that told the tale of the Kingdom’s descent claim to have reason to speculate that life in the Court of the doomed Kingdom was a happy one and that the love the King and Queen had for each other may linger still… somewhere, in what remains untainted of their psyches. And, around this Festival of Love, the more romantic of these historians, mainly Knights and Paladins by trade, compose wistful poems and songs of what could’ve been. And of what remains. The Story of Love Campaign is an early experiment towards an actual Battlepass, where the real thing will of course be longer, more varied, and have free and purchased progression. Read more about it in our blog post.

We continued our improvements in the UI/UX of RotMG and we are moving all purchasable items, either with Gold or with Fame, to the Shop menu, so they are easy to access and all in one place. For now, we will keep the items exposed in the Nexus and Bazaar but this might change in the future. The tabs should be very self explanatory and you can easily distinguish Mystery Boxes from Packages via the chest icon on the top-right.

You also added the possibility to experiment with cloths in the Wardrobe and save your outfits for later. Give it a try!

For a complete list of all the skins you can get with each pool of Mystery items please visit this page. (layout going to be better soon)

The new ST sets will now drop from the following enemies: