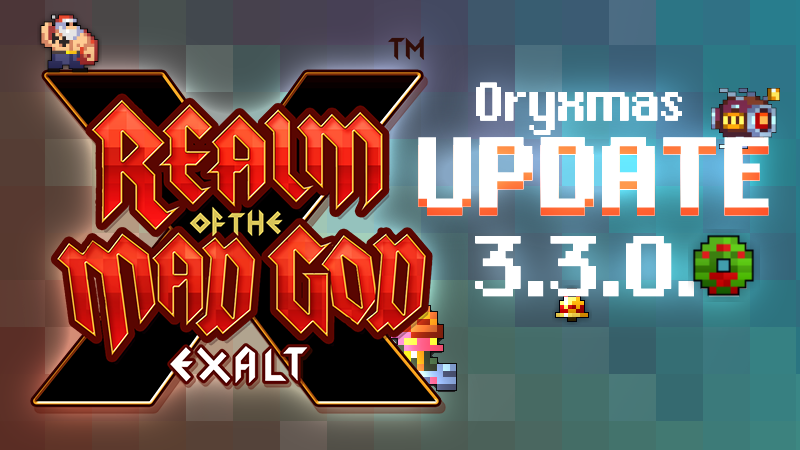 The year is slowly coming to an end but we still have 1 more Update in our sleeves. Remove the dust off of your sledge and get ready to jump into the new content coming to Realm of the Mad God. With this release, we are introducing the Kogbold Steamworks to you! Beat the mighty mechanical enemies on a Seasonal Character to gain even more rewards with our new Missions Feature. And while you do all of that you will even gain extra BXP for our new Battle Pass! Down below you will find more information about all the new things.

The Steamworks is a completely new dungeon coming to the Realm of the Mad God. Its Difficulty level is around 8/10, which makes it a very challenging dungeon, apt only for the well-prepared.

Long ago, before the reign of Oryx, before the gift of immortality was stolen from the heroes, Kobolds inhabited the realm. A race excelling in craftsmanship held back only by their tragically short lifespans, Kobolds were never truly able to reach their potential. In the Archives, they were thought extinct… until now.

Under the radar, a very tiny group of Kobolds survived for centuries. It is unknown how they did escape Oryx’s conquest, but they did. They thrived and perfected what would ultimately be the salvation of their race: true artificial, omniscient intelligence. It bore no fancy names, as the kobolds simply called it “the core”. But it was indeed a miracle of technology, and it changed their fate forever.

Kobolds evolved. Their fragile, weak flesh was reinforced by metal, their organs remade with brass and steel. Ideal to live forever. To work forever. The Core made its creators immortal, and then made them work for it. With time, this was their only truth, the Core was the supreme supervisor and they, reborn as “Kogbolds”, would play their part. The roadmap is already planned. There’s lots of work to do.

Efficiency. Unstoppable growth. The Core was determined to take the chance of learning more, assimilating more, control more. It was time to send an expeditionary force, conquer the realm, and assimilate its resources.

The Steamworks is a huge factory, well hidden from prying eyes thanks to the use of advanced technology.

The Steamworks is composed of several different rooms. Each of them has a different function and shape, but all of them have dangerous environmental hazards that will make you think twice before crossing them. In the Steamworks, the rooms themselves are part of the challenge. Learning how to navigate through them and make the best use of your class’ ability will prove to be a true challenge in itself.

The Steamworks is diligently managed by the ultimate AI, known as the Factory Control Core.

Because it values efficiency the most, it won’t waste a single bit of energy on you unless forced to. Due to that, this boss has 3 different forms, as you manage to force it to recombine itself into stronger forms.

This bossfight is a challenge we hope you will find compelling. Through several phases, the Core will try a variety of attack patterns for which all character classes can find diverse countermeasures.

Before entering the boss room, players will meet the mini-boss – the Kogbold Flying Machine. It acts like a “Marble Defender” type miniboss, holding any rushers up so groups can catch up!

Mark of the Control Core

The Steamworks will be accessed in the realm through an Encounter miniboss. The expeditionary force sent to the realm by the Core is none other than… a train?

The Kogbold Expedition Engine is a powerful entity engineered in the Steamworks, and it transports all the workers sent by the Core to the realm. It is an intense fight that will take place over train tracks which the Kogbold Expedition Engine follows. Of course, this machine is packed with powerful artillery and can deploy Kogbolds and other surprises… so don’t let your ward down on it!

After a defeat, the Kogbold Expedition Engine will leave an open portal to the Steamworks.

You can find the Encounter up to twice per realm.

Dungeon Turrets are disabled while they undergo maintenance

We want to thank the 2Scallions (Slapjack and Jeroen) for their amazing work on this outstanding soundtrack inside The Steamworks.

If you play a Seasonal Character, now you will have access to the new Mission system. Missions are tasks that you can complete in exchange for prizes and Battle Pass XP.

The Mission Menu can only be accessed from Nexus. To open it you have two options:

Let us directly address a question that already came up during our Public Testing. If you finish the new version you will receive a 60% discount on the next Battle Pass coming in February and we have increased the amount of the free rewards while progressing. As announced a while back, the Seasonal Characters, Battle Pass, and Missions are part of 1 system, called Seasonality. The Missions will give you access to even more rewards. Seasonality is a live system and more changes can be expected in the results from every season.

With this release, we are introducing a brand new cosmetic feature: Emotes.

You can have a look at all emotes here:

These five emotes will be gifted to all players upon release. You can unlock them for 0 Gold directly in the Emotes tab.

A note on emotes

This update is the first release where emotes will be available for the players. As such, we are focusing on stability while providing a limited amount of emotes. Our goals are to test this new system and also to obtain your feedback for future iterations of this feature, and then we will shift our focus to releasing a wider variety of emotes.

Please let us know what you would like to see from this feature or what improvements you would add!

Oryxmas this year will kick off with events in the Fungal and Crystal Cavern, and in the Realm with Snowy the Frost God and the Permafrost Lord. You might want to try and hunt for some presents!

Event dungeons and bosses will also drop “Festive Cog” tokens for sweet prizes at The Tinkerer for the duration of Oryxmas! You get 2 Cog in Exalt Dungeons and 1 in the other event dungeons.

During the whole time of Oryxmas, we will activate 2x Event Whites every single weekend, starting on Fridays and ending on Mondays.

We have more Events coming up in the next weeks! We will update you when they start to happen.

Most of you behaved this year, so Oryx left some presents. Claim your free pack in the Shop!

The Veteran Skin Collection is back for our Veteran Players! Players with accounts created before 2015-12-13 08:00:01 will be able to get this collection for 2555 Fame. This is our way to thank Veterans for playing Realm for longer than 7 years. Special thanks go to NblankFour for his collection up to Summoner! This Package will be available from today until the end of the Oryxmas event.

As part of our changes for new players who are learning the game, we have introduced an extended tooltip for the Potion Vault.

When you hover over your potions, you will see additional information relevant to you, like potions you still need to consume to max that stat, or a couple of our suggested locations for where to find that potion. This is not an exhaustive listing of all the locations where that potion can be found, but a recommendation!

As always when new festivities start, the Nexus is shining once again in the spirit of Oryxmas. There isn’t anything better than relaxing in front of the fireplace after beating O3 for the first time. Or dying to him for the 15th time.

Our Gods also had a small makeover. They are ready to celebrate the release of the Steamworks just as you are!

We are aware of an issue that made the following items tradeable. This will be fixed in a later update.

This Oryxmas Biff felt really left out so he stole all of the presents and replaced them with eggs, you need to find out if he was nice enough to put actual presents in them. He will be stopped in the near future with an update.
Due to an exploit during the Wetlands Speedrun Contest, we have decided to reward the Pet and the Title to every player who finished a wetlands dungeon. We will rework the way we do these events in the future.

Regarding the open topic concerning what happens to Vault Unlocks when a Season ends, they will currently be voided and not be transferred to your regular characters. This might change in the future but for now they won’t be taken over!