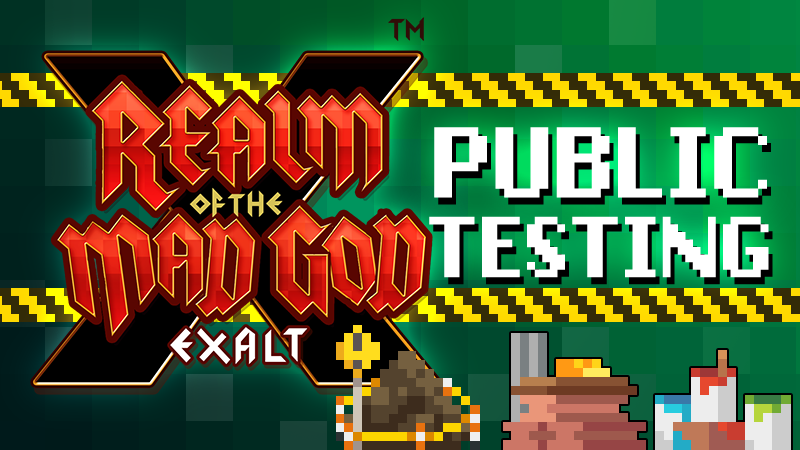 It has been a while since our last Public Testing session! But now the time has arrived and it’s a big one. We are going to test several upcoming features and events. Additionally, even a completely new dungeon that you can fully test on Sunday!

As always it’s very important for us to receive your feedback so go ahead and join our Public Testing session to help us improve the game!

The Sulfurous Wetlands Dungeon will be accessible for testing starting Sunday.

This batch of STs is themed around those dwelling within the murky swamps and the things they do away from prying eyes. You will be able to buy these ST Sets in the shop on the Testing Server.

Names, descriptions and some properties of these items are still work in progress and will change in the release.

The Shaman Necromancer is a ST Set based on a “glass cannon” playstyle. One of the peculiarities of this ST set is that there are two rings in it, so the ST set is not made of 4 items but 5. You can pick which ring to use depending on your preferred playstyle, and will still give you the set bonuses.

The weapon, Shaman’s Staff, fires out 1 main projectile and 1 multi-hit subattack that curves in from the side. The Ragged Robes also complement the set with some stat boosts, though the set is very balanced towards the offensive side.

The ability Ritual Skull summons a Ritual Circle on the ground dealing AOE damage to those within, and more damage the closer the enemy is to the skull at the center.  Also, depending on which Ring you wear, a new function will be added to the ability: The Fang Necklace adds a Berserk Buff, while the Soul Gem Amulet adds a Slowed debuff. Swapping the rings will also slightly change the skin!*

*Note: The Necromancer ST skin is not yet available and so previous Necro skins will be used to showcase the skin swap functionality, as a placeholder.

The Alchemist Assassin forgoes his blade in favor of his trusted toad companion, the Toxic Toad, which shoots out poison grenades.

No longer needing a regular poison, the Alchemist opts for a Makeshift Blowpipe, shooting out more projectiles if they are wearing pieces of the ST set. These Blowpipe darts can take advantage of the higher Damage Boost provided by the Toxic Toad. The Protective Gloves allow for better handling of the Toxic Toad, giving it a 20% to shoot out an extra Poison Grenade.

The set is completed with a leather armor fit for an Alchemist, the Alchemist’s Disheveled Garbs.

We know some of our players might want to learn Shatters, but find learning not one but three bosses a bit overwhelming. Thinking of them, we have decided to create the Rehearsal Dungeon Mods for Shatters.

Rehearsal mods cannot be accessed normally nor through key refining. For our Public Testing session, you will find a free pack in the Shop (limited to once per account), but these keys must be used next to the Shady Vagrant in the Realm (do you remember him from Vindication? 😉 ) . So please find him in the Realm and then use your keys!

This access method is only valid for this Public Testing session. We will give more information about how Rehearsal Shatters will be accessed in the game at a later date.

*In this Public Testing, the Rehearsal Shatters keys can only be used in front of the Shady Vagrant who will spawn in the Realm.

The regular loot from the Shatters will not drop from a Rehearsal Version. Instead, the Rehearsal Shatters have a chance of dropping Rehearsal version of the items. These items have similar mechanics, and albeit powerful on their own, they aren’t as powerful as their “true” counterparts from the regular Shatters.

You can find them in the Shop during our Public Testing session.

Shortly after the fall of the Cursed Library, Lord Ruthven set his sights on smaller targets to slowly corrupt the realm as a means to enable quick subjugation by Oryx. The many villages of the realm were easy targets, however one stood out.

An ancient, towering willow tree remained stalwart in the village center for generations, and over the flow of time, had developed a labyrinth-like root network spanning unimaginable lengths across the realm.

The seemingly perfect target backfired on Ruthven’s attempts, however, channeling the corruption to only the village once called home.

My name is MOONSHOOT and I am excited and proud to introduce you to Realm’s newest dungeon! Enter this acidic bog at your own risk. Within it are a myriad of perilous plants, twisted trees, and warped wanderers. The Wetlands will be dropping from a new godlands mob: The Grand Dragonfly, with its availability being akin to mobs such as the Sting Spider, Corsair Crab, and Great Owl. It shares a similar difficulty level as the counterparts above and aims to give the area another challenging yet rewarding experience.

With this new dungeon brings new items! The dungeon has been in development for quite a long time and as a beginner’s personal project, has seen many, many changes over the course of its creation. With that being said, many item concepts were also made over that period with the intent at the time being for a different difficulty level. As such, item drop locations, rates, concepts, and what will ultimately be added on the release are still up for discussion and debate both through feedback and internally! We want to hear what you think about anything and everything for this exciting addition to the game!

A note from DECA: Thank you MOONSHOOT and Maelstrom for creating this amazing dungeon! We are looking forward to all the feedback from the players.

We have added customizable gravestones to Realm of the Mad God. If you are not aware, there exist 11 different versions of the gravestone you get when your character dies:

You can now customize your gravestones in the Wardrobe, inside your Vault.

You will be able to obtain different Gravestones through events, Battlepass, direct purchase, and other varied methods.

In order to select them, you can customize each Tier separately. Go to the tier and pick the gravestone from your collection, click on Select Tier to confirm your selection.

But also, most gravestones belong to a “theme”. For example the “Alien” Theme or the “Mossy” Theme. So if you click on “Select Theme” the system will auto-equip all the gravestones you have purchased of the same theme as the one you are currently selecting.

The Gravestones used in the PT are placeholders to test the functionality and might not be representative of the final ones.

We have introduced a little feature for helping our beginner players to learn the game a bit better. For that, we have introduced the Helper Panel, a small widget in the screen that displays information about elements near you.

Helper Panel appears near elements that are mostly essential for a beginner player learning the game. Things like the Realm portals, the different elements inside the Vault, or the early dungeons. While the Helper Panel is not a comprehensive guide on the progression, we believe it’s a step towards a more beginner-friendly progression on the early stages.

Helper Panel is by default enabled. You can make the Helper Panel disappear by pressing the closing button on the panel. If you check “Don’t Show Again” it will be hidden all the time.

You can also re-enable or disable Helper Panel in the Options menu, under Gameplay/Accessibility.