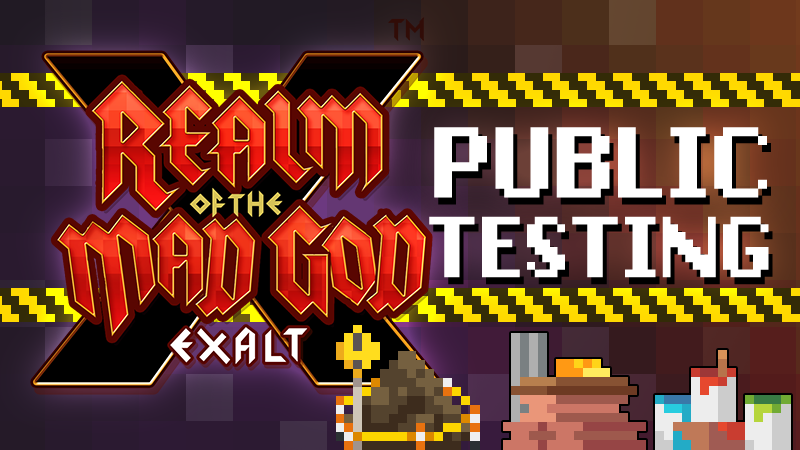 The new year began and we are starting it with a bang. Our first Public Testing session this year will introduce you to a new upcoming dungeon from Mizumi (and more as you will find out). In order to fully test and understand the dungeon, you will find portals to it in the Nexus. The new UTs that will drop from the dungeon can be found in the in-game Shop. The game version also includes updates to Unity, so if you find any visual bugs or issues, please report them to us. The PT ends on Monday at 9 AM CET. Let’s give the stage to Mizumi.

There are many discordant spirits in the Realm – beings that amass great amounts of power to cause great change in chaotic ways. However, there are also harmonious spirits – those that exist in the background in order to maintain a thin yet tangible balance between the forces in the Realm. Due to their mostly passive nature, they are seldom encountered by mortals – until very recently.

A great migration has occurred in the Realm, and thousands of wispy, floating lights descend upon the land, always traveling but with no cohesive destination. Some of the Realm’s denizens appreciate the unexpected beauty of this incident, while Oryx sees them as but a minor annoyance. With their seemingly endless numbers and a lack of a central source, removing these wisps was an act of futility for Oryx’s minions.

It serves as the border between the ethereal and the physical, linking to a far away foreign land. Crossing would bring one to an old and seemingly abandoned eastern village. What lies here may be the spiritual remnants of a long, bygone culture of exquisite dance and cunning warfare. However, this village is not without its occupants – ethereal dancers of an ancient, yet strangely recognizable art. What you might not realize, is that their form of dance may be far more lethal than it seems.

I am Mizumi, the lead creator of the Moonlight Village dungeon, and I will be your guide to tonight’s festival. This dungeon has been in active development since the start of 2022, with the help of stellalumi and Zquidx, and we’re pleased to show you the fruits of our labor. Follow me!

The Moonlight Village is an old eastern fishing village which lies far away from the grasps of Oryx’s rule.

The peaceful village comes alive at night, as spirits gather to witness the spectacular festival!

Moonlight Village is a dungeon set within a small fishing village at night, on the eve of celebrations. Unlike most dungeons in the game, this one has no minion clearing section and will instead consist purely of bosses. There will be three dancers that will greet you at the festival!

The three dancers rotate throughout the festival to be the central performer. Once a dancer has performed once, they won’t become the main dancer again but will act in a supporting role! The festival will end once all three dancers have performed and the closing act has finished.

Although their lively performances may appear welcoming at first, ensure you are able to keep up with their pace or you might end up joining the souls that have passed on! The core dungeon has varying levels of difficulty depending on the player’s choices, but it aims to hit an average difficulty of 8/10.

Moonlight Village has various unique mechanics that determine how you progress through the boss fights.

Unlike other boss fights in the game, the festival dancers will not use a health bar as an indicator for the progression of the fight. Instead, they will have a counter bar that signals to players how far they have advanced through a phase. Think of this as a timer!

Other than the damage timer, there is also a second timer mechanic that you will encounter called the lantern timer. Between each ‘normal’ phase of the boss, there are survival sections known as danmaku phases.

The reward system for Moonlight Village is also quite different from regular dungeons. The better you ‘perform’ during the fights, the higher the quality and quantity of rewards!

In essence, the faster you are able to complete the dungeon the higher the grade of loot that is provided at the end of the festival. This means players must both be able to consistently deal damage to the bosses as well as follow the lantern closely if they want better chances at loot.

These are the UTs that will be tested for this public testing session. There are several more UTs that can drop from the dungeon, but they will be withheld for this session as we would like to see how this set of UTs perform in a more simplified setting.

Moonlight Village is set in a fishing village, so it wouldn’t be complete without the chance to fish!

Fishing will be the dungeon’s equivalent of a ‘treasure room’, where players might get the chance to earn more rewards after completing the festival section of the dungeon. The fishing spot is located above the village’s central courtyard.

Before beginning, make sure to equip a fishing rod into your ring slot. In order to cast your line, simply shoot in the direction you want and the line will be ‘cast’ exactly 3 tiles away from your character. Aim at ripples in the water to try and catch fish! Although you (unfortunately) can’t keep the fish, the quality and quantity of fish you catch will accumulate as a score out of 1000. Catch as many fish as you can within a minute to reap rewards!

Larger ripples will contain rarer fish which contribute more to the total score, but they will also be more difficult to catch without the proper fishing rod. There are several ‘tiers’ of fishing rods, with higher tiers having a better success rate.

The main reward for playing this fishing minigame will be nildrop-esque consumables with longer durations that only apply to self; however they also double as pet food! The stronger fishing rods will also drop if you do well in fishing, and there is a chance for the dungeon’s UT armors to drop too.

The dungeon has something for everyone, so we hope you enjoy your stay at the festival! Please remember to give feedback on both the dungeon and the UTs as there are many experimental systems at play.