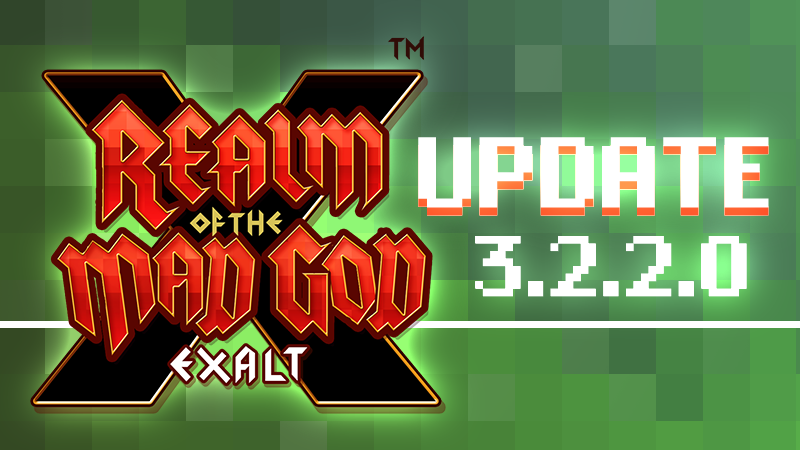 You have tested them in the past weeks and now it’s time to enjoy them on our live servers. Seasonal Characters arrive in Realm of the Mad God! Keep in mind that Missions are not quite ready yet but will come in the very near future. Additionally, we have prepared an Event for you to chase to unlock some perks. But you have to play a seasonal character to take part in them!

Seasonal Characters are characters which apply special rules for the duration of a season. Rules will be described before each new season.

Why play a Seasonal Character?

Seasonal Characters get a permanent +10% BXP bonus during the whole season. This means that, while you cannot equip gear obtained in the past, your progress is accelerated when playing them. This feature is however under development, and will come at a later point.

Also, one of the most interesting aspects of Seasonal Characters is their exclusive access to Missions, another upcoming feature that will allow your Seasonal Characters to do certain tasks and obtain unique rewards and BXP, only available for the season. Regular characters cannot participate in missions though!

Seasonal Characters have a separate Vault Chest, Gift Chest and Potion Vault. This means you cannot access your regular storage with them! You will have to start “from scratch” every season.

Gift Chest is also available for seasonal characters, but bear in mind that if you make a purchase or claim (for example, a shop item or a completed quest) the items will go to the seasonal/regular Gift Chest depending on what character you are playing with at the time – a seasonal or a regular character!

This means that, if you want a claimed item to go to the Seasonal Gift Chest, you should make sure to claim the prize with a seasonal character!

How to create a Seasonal Character

A Seasonal Character can only be a new character. You won’t be able to use an existing one.
In order to mark your new character as seasonal you can toggle the seasonal function in the character overview menu. This section will be toggled on by default.

In order to see if a player is using a seasonal character or a regular one, we have added different colors. This color will apply even over Campaign Supporter colors.

For seasons to make sense, trading is limited. When playing a seasonal character you will only be able to trade with other seasonal characters. When inspecting an incompatible character, the trading option will appear as disabled.

Seasonal Characters share their Vault, Potion Vault and Gift Chest; but they are completely separate from the regular version of a character. Practically, this means you cannot share items between regular and Seasonal Vaults. Only your seasonal characters can open this Vault and deposit and extract items from it.

Every new season the Seasonal Vault will be completely wiped and therefore be empty with 16 slots (old items are transferred to the regular Vault).

The Forge will only use items inside your Seasonal Vault when playing a seasonal character, and it is also reset on every season for your seasonal characters. You can still use blueprints to unlock recipes in it, but you need to be conscious of this reset.

The Seasonal Vault is a new entity and Vault expansions for your regular vault do not apply. The Seasonal Vault can only be expanded once per season, from 16 to 32 Slots. Click on the “Expand” button with the Vault menu open to do so, and this operation costs Gold.

The Seasonal Gift Chest is a new entity and does not share the loot with the regular one. All items that are supposed to be sent to your Gift Chest when playing a seasonal character, will end up in this special version.
This includes buying items in the shop, Daily Login bonus, rewards from quests, etc.

This also applies to your wardrobe. You can still use all the skins/gravestones you already own on a regular character, on a new seasonal character.

Also, all items in your Seasonal Vault, Seasonal Potion Vault and Seasonal Gift Chest will get converted into “Seasonal Chests” and transferred to your regular Gift Chest.

Once this is done, all your progress on the season will be reset, starting the next season with a cleanslate. Storage and forge will also reset.

The Rule Changer NPC is still not implemented.

You will find a new NPC in the Nexus to convert your seasonal characters into regular ones. Upon approaching him, a button will appear that states “Convert Seasonal to Regular”. If clicked you will get a notification that this decision is final. The CS Team can’t undo this decision.

Starting on the 22nd of November and ending after two weeks, on the 5th of December, the Seasonal Gratitude Event will find its way into Realm of the Mad God. Your goal? Work together as a community and slay the bosses in the Lost Halls, Cultist Hideout and the Void with a Seasonal Character. For every character that witnesses a kill on one of these bosses, the community receives 1 point towards the global objective.

Objective 3: The Void Entity requires 5500 Points to complete it.

The rewards for this Event depend on how many goals you are able to finish as a community!

If one of the goals is completed, players will earn one week of Free O3 with their own community goal for a chance at an additional title.

If two of the goals are completed, all players will be treated with an O3 Chest Event.

If you are able to complete all three goals, every player that contributed to the objective will be granted the new Chibi Oryx Pet Skin.

With this new QoL feature, by default, the “advanced” details on items that have long tooltips will now be hidden. You can hold the Contextual Information button (by default, LCTRL) while hovering the cursor to see a full description.

This will only apply to items that have a tooltip higher than ~2/3 of the screen.

Starting on the 22nd of November at 12 AM UTC until 5th of December at the same time, the Lost Halls, Cultist Hideout and the Void will give 1.5x XP and Loot.

Starting on the 22nd of November at 12 AM UTC until the 28th of November a Chest Event will be running in the Third Dimension.

Starting on the 28th of November at 12 AM UTC until the 5th of December a Chest Event will be running in the Woodland Labyrinth.