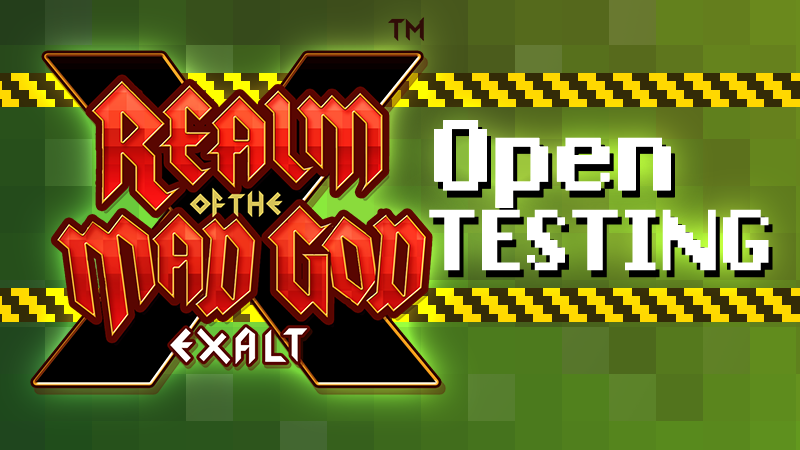 It is time for another Testing Session. This time we are focusing all of our eyes on one of our new, upcoming events!

Oryx, in a fit of drunken nostalgia, is reliving his gladiator days. He has organized a championship for the most feisty fighters among his subordinates. They don’t even have to win – they just have to show that they have gusto worthy of the Mad God. So it’s not those that prevail in the most fights that will win his gladiatorial championship, but those that throw themselves into the most fights! The heroes of the Nexus are the lions of the arena, getting into the gladiatorial spirit themselves and on the quest to defeat the to-be champs.

After the Cyclops Gods have been defeated and after the Ent Ancients and Liches have been slayed, Keyper will spawn in his role as the Arena Announcer. He is going to drop eight mysterious Arena portals. You will not know which Arena you are entering until you have loaded into it. There are four options.

The bosses from these Arenas will be dropping their usual loot as well as 8×8 action figures pet skins of themselves in costume.

At the end of the event we will see which gladiators threw themselves into the most fights to win Oryx’s Gusto Prize! The prizes will be announced with the upcoming release notes for the event. Their dungeon will become the host of a generous Chest Event, and they will become celebrated as the theme of a free pack containing a 16×16 pet skin of themselves, as well as many other rewards. Heroes of the Nexus will not be so able to influence the winner, but their job is to beat ’em all up.

In the Ocean Trench, Deadwater Docks, Secluded Thicket and Puppet Master’s Encore, a random Arena portal will drop after defeating the boss. These dungeons also grant 1.5x loot and XP.