The newest update to Realm is coming today! New exciting things are coming to Realm. Two dungeons long in need of a touch-up — the Mountain Temple and Lair of Draconis — are finally hitting the live game with many great gameplay changes, we hope you enjoy the experience these refreshed dungeons will now bring! Another long-awaited change is a rework to Bows, try them out in-game and let us know what you think of them in the blog comments. Let’s not forget about the two new campaigns we are bringing into the game. Elemental Easter is coming with a big event schedule, make sure to check out the overview down below.

Water, Air, Fire, Earth. The Masters followed a strict routine that trained the mind and body in conjunction with the Elements. This training method, never completely forgotten but lost to the waves of time, is now resurfacing again thanks to the inspiration provided by the Masters who have reunited after centuries of adventures.

The carefree friend of Flames. The voice who calls the Storms. The guardian and nurturer of the Earth. The sword that bends the Ocean waves.

Together, the four masters have brought ancient knowledge back to the Nexus heroes, and taught them to use their weapons, and more importantly their minds, in a focused, enhanced manner.

While the Four had a common cause in helping the Heroes improve their prowess, they took a peculiar interest in the Kensei, Summoner, and Bard, bestowing them with ancient artifacts and the knowledge to use them. Those artifacts had long-awaited for the Heroes worthy of using them to appear and now, they shine as bright as the motivation of those who will take them into battle

We prepared two campaigns for all of you to enjoy! The first one, Nature’s Upheaval, starts today and will get the festive mood going. Nature’s Upheaval will end on April 11, 12 PM UTC but will have a Grace period until April 13, 12 PM UTC during which you can claim rewards, but not points.

Find out more about how to receive campaign points and what kind of rewards we have in place for you, down below.

How to get Campaign Points:

“Nature’s Upheaval Free Pack” will be available for free from today until the 3rd of April 08:00:00 UTC.

The pack will include:

The pack will include:

…our Mother and our Essence and our livelihood… we would now seek its full potential.

We sought to ape its astonishing force, to reproduce it in our environment…

…the principle of things that are, Water could take all forms that make up our world, and we harnessed it…

Within this relic, all elements swirl in perfect equilibrium. What would otherwise unleash cataclysmic disaster holds together in immaculate arcane homeostasis. We would surpass it.

Fury of Flame and Storm: Gain +5 attack and dexterity while attacking if your health is above 90% Max HP

Perseverance of Land and Water: Gain +5 defense and +15 vitality for 10 seconds when taking damage below 60% Max HP

Our elder would look upon the storms and pondered on how a thing with no substance could leave but desolation in its wake.

And the Great Wave bore upon our dwellings, flushing us and our beasts and our tools… but one remained, and he held aloft his blade, and summoned to himself the powers that still haunted this place.

What force would do but the very force behind life and movement? No other. This weapon would prove it.

She had read the tomes of other races, and she had the wisdom of the Earth. She saw how we must proceed.

…and Chicken Oryx awaits you in his Chicken Chamber!

Additionally, you’ll find the Avatar of the Forgotten King is also in costume.

Master of the Elements

As the Elemental Equinox takes place over the Realm, you can choose to (cosmetically) become the Master of the Elements, an unprecedented Wizard skin with four sets of elemental attack animations or get a new companion in a form of an Elemental Beast, a towering arcane creature of the Elemental Plane.

But getting them is not easy and requires sacrifice. You will need to merge skins of all four elements in order to obtain one of the Elemental master skins. For Elemental Beast you will be required to complete the “Faithful Beast” quest and use Young Water Elemental Pet Skin, Young Earth Elemental Pet Skin, Fire Elemental Sorcerer Skin and Air Elemental Paladin Skin: four skins that you can get from the free campaigns during the event. If you decide to merge them into a Beast, remember to not unlock those skins before you gather all four, so you are able to exchange them at Tinkerer.

Here are the Easter Quests that start now!

With the arrival of Spring in the northern hemisphere, the temperatures are rising and nights are becoming shorter. For those of you that have been with us for a while, you might already be familiar with the last bounty that we had during Autumn. Well, as the leaves are returning to the trees, so is a Spring version of the bounty coming to Realm.

For those of you that need a refresher. Whenever you make a purchase of select boxes or packs, you will get one or several Spring Gifts, a mystery item that contains many rewards with potentially very high value. Spring Gifts don’t add to the price of the box or pack.

If you get Spring Treasures from the Gift, it will drop one of the treasures for you: Secret Hoard, Backup Stash, Key to Oryx’s Armory, or Mirror of Vanity. You’ll have to reach out to customer support in order to claim the bounties. Please keep in mind that bounties from Secret Hoard or Backup Stash will be added to your account after the end of the program.

Please note that the description of the following items is not correct. You have time to redeem the items until the 14th of May 2022. We are going to correct this error with the next release.

Spring Bounty starts today, March 29th, and will end on May 1st. You will be able to claim your bounties until May 14th.

In order to fully enjoy the refreshed Lair of Draconis and Mountain Temple, Rock Dragon and Jade and Garnet statues will spawn in a scripted rather than the usual way:

Helm of the Swift Bunny:

Magic. Was it the fifth element, really? Sages wouldn’t agree with it, and it remained a hot debate topic amongst academics. But it never transcended that.

Except for the ones who secretly researched this volatile, almost forbidden element.

Woken up from slumber, the ancient dark spirits once again pledge loyalty to the king whose name nobody remembers. A power darker than themselves. The Forgotten King is somewhat… different? And what is the Archmage doing? Somehow, the Magi inside the Castle is changing. It is adapting, growing in speed and intensity. The dark magic runs through the Castle like blood through the veins of a strong, dark lifeform. How is the Shattered Kingdom changing yet again?

We have decided to alter The Shatters to cut down on the time needed to complete it. We have done that trying to keep the essence of the dungeon, but focusing on the Castle section, which was the part that received the most feedback and also what our data indicated could benefit the most from a completion time reduction. We also wanted to improve the Dungeon’s balance toward solo players. Overall, we aimed for Shatters to have a very significant speed up thanks to these changes, which we detail here:

This QoL change will allow you to mark a pet as “favorite” by clicking on the little icon next to its name in the Pet Menu (go to Pet Yard and talk to the Yard Caretaker).

A “favorited” pet will auto-follow your character when you create a new character.

When you attempt to unlock a skin you already own, you will get a prompt to swap it for Crystals of Fortune. Please note that this does not apply to rank 6 skins, tradeable skins, and no rank skins.

A popup will appear when you try to consume a skin that you already have in the wardrobe:

The following Skins were made tradable:

The Veteran Skins are back! The collection of skins is available for the ones who have stayed with us for a long time! Players with accounts created before 2014-12-14 08:00:01 will be able to get this collection for 2555 Fame. Special thanks once again to NblankFour for his collection up to Summoner! This Package will be available from today until the end of the Easter event and will be back during other big events later this year. Here they are: 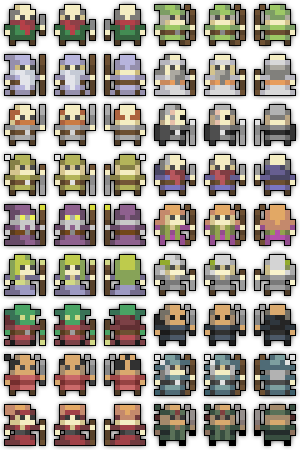 Changes requested by the community: